An Indigenist community-based research project between:

On August 6, 2016, this 36-foot cedar canoe carved from the 350-year-old Old Woman log was launched in Musqueam. While the Musqueam people have been carving canoes on this traditional land for centuries, this particular canoe is the first to be built, carved, and launched in Musqueam in over 30 years.

The canoe launch was featured on the CBC National Radio program World at Six
August 9, 2016

The eleven-year relationship between Shelly Johnson and Corrina Sparrow began as a social work instructor and student at the University of Victoria, transformed into one of social work colleagues at Surrounded By Cedar Child and Family Services in Victoria, and then into friendship. It was a coincidence when they both moved to Vancouver within one year of each other. Shelly joined the UBC School of Social Work as an Assistant Professor in July 2012. In 2013 Corrina returned to Musqueam First Nation, and became the Social Development Manager. Two weeks after Corrina returned to Musqueam, the two friends met to talk about Indigenous life on the UBC campus and in the Musqueam community.

Corrina told a story about the need for more youth programming in Musqueam, her dream to build a carving shed and facilitate a Tribal Journey for youth with an ocean-going canoe carved in Musqueam. “Let me know if half a million dollars falls into your lap, ok?” Corrina joked to Shelly. One hour later, Shelly returned to her office, and opened an email announcing a call for proposals in the upcoming Social Sciences and Humanities Research Council of Canada’s (SSHRC’s) Insight Grant competition. She called Corrina and said, “There’s half a million dollars available to help fund your dream for the Musqueam youth. I’ll send you the proposal requirements, then we can talk”. Laughing, they agreed to meet in a week; once they could talk with others about the research funding opportunity. 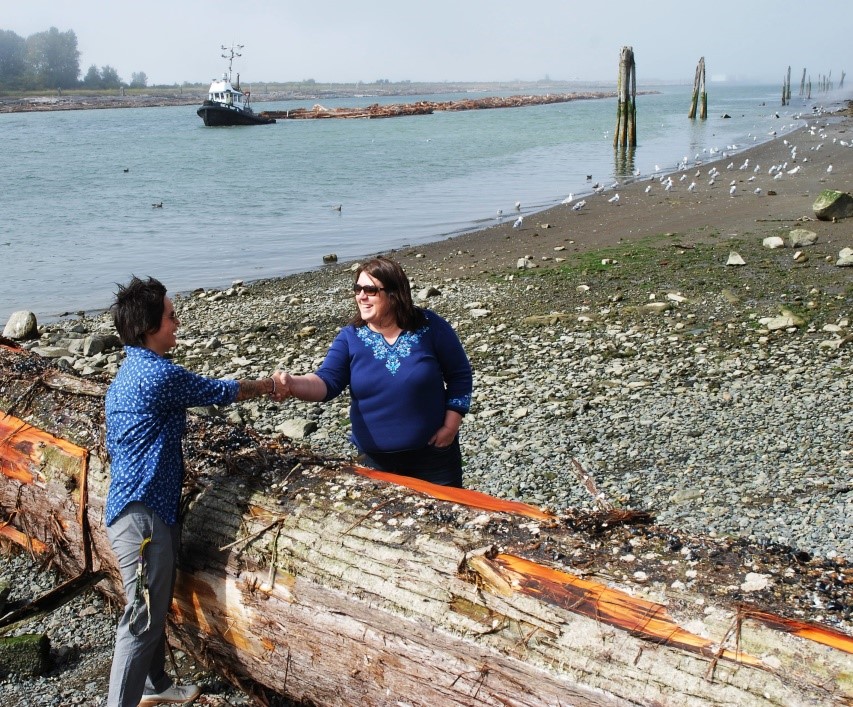 Corrina agreed to talk with Musqueam elders, carvers, proposal writers, youth and political leadership. Shelly went to visit Dr. Jo-Ann Archibald, (Sto:lo and Xaxli’p), Associate Dean of Indigenous Education and Professor of Educational Studies in the UBC Faculty of Education. Jo-Ann was Shelly’s former doctoral supervisor, a world-class Indigenous researcher, author and teacher. Once she understood the broad concept of the research project, she agreed to help refine and develop its educational components. Once Dr. Archibald was in agreement, together she and Shelly brainstormed additional people to invite onto the project. “We’ll need someone from Forestry to help us find a tree big enough for a canoe” the social worker and educator mused. Shelly recalled Andrea Lyall (Kwakwakwakw), the only Indigenous forester in the UBC Faculty of Forestry, and the sister of a friend to Shelly and Corrina. She called Andrea, but Andrea wasn’t in. Fortunately she did not have to look too far. Shelly and Corrina found Andrea playing Bingo in the Recreation Centre at Musqueam Indian Band on June 21, 2013, National Aboriginal Day. Their opening statement asked it all, “You’re Ruth’s sister, and a forester, right?” We explained the project and invited her to be a partner. She agreed. 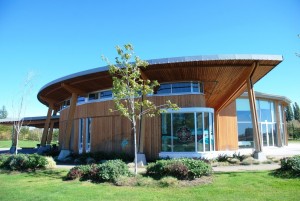 In the coming weeks, we met a few more times at the Musqueam Indian Band and talked about what the knowledge we could bring to the project, what knowledge, skills and abilities we needed, and who we should invite onto the research project. In a short period of time, Corrina confirmed the support of the Musqueam Chief and Council, Elders, Carvers, Education Department, Police, Social Development Department, Culture and Lands representatives, and others. We took the proposal requirements apart, assigned responsibility for each piece, discussed and decided on each component of the project. Finally, the proposal was ready and submitted on October 7, 2013 along with a financial commitment from Musqueam Indian Band in the amount of $50,000.

In May 2014 we learned that SSHRC approved our Insight Grant for $500,000. More than that, our proposal was assessed at #5 in the national competition. No canoeing proposal such as ours had ever been funded by SSHRC, the SSHRC representative confirmed. “Then why did you decide to fund this one?” Shelly asked. “Well, the fact that you had more support letters from the Musqueam people than the system had the capacity to upload was a factor”, she said. “That and the funding commitment from the First Nation was an indicator of its importance. Plus it was highly recommended by the reviewers”. 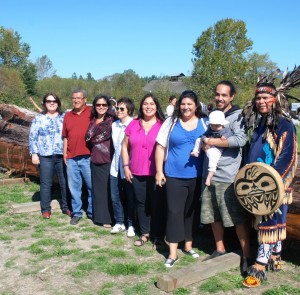 Once the Musqueam Advisory Council was established, the work began to gather Forestry knowledge about a potential journey canoe log and a racing canoe log. Andrea and the Elders searched from Vancouver Island to Alaska, through contacts with Forestry companies and many First Nations. Specifications for the style of a carving shed were sought from community members, and builders were contacted for bids and plans. Soil samples were taken on the site chosen by the community members for the erection of a carving shed.

Information gathering talking circles were held with Musqueam male carvers and paddlers about the history of canoeing, canoeing stories and language place names in Musqueam and surrounding First Nations communities. Additional talking circles were coordinated with Musqueam women and youth to learn about their roles in canoe races, festivals and canoe journey’s along the West coast. A UBC Master of Social Work student completed a literature review on the topic of Indigenous canoeing in the Pacific Northwest. Shelly and Corrina presented at the International Indigenous Research Conference in Auckland, New Zealand and contributed to the conference proceedings. That opportunity resulted in new contacts with Maori canoeing initiatives in New Zealand, and knowledge about how the Maori raced canoes using traditional Indigenous knowledge of the tides and moons.

Early in September 2015 after a massive search for a 40’ cedar tree appropriate for a journey canoe, one was located at Shell Beach, near Ladysmith on Vancouver Island. It was brought to Musqueam and laid on the foreshore for three days until arrangements could be made to bring it into the community. That process occurred on September 11, 2015 and was witnessed by a number of Musqueam political, social, economic leadership and community members. Musqueam songs were sung to awaken the spirit of the “Old Woman” log; so named to acknowledge the circle of women that had brought the research project from an idea to a reality. 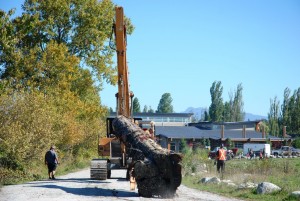 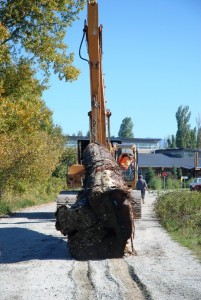 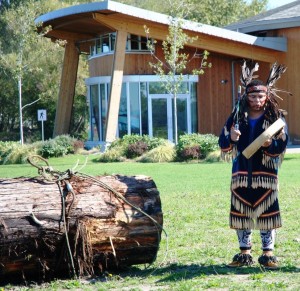 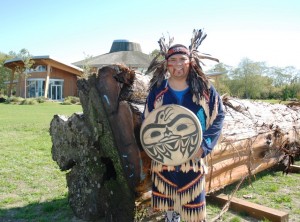 According to Dickie Louie, the master carver on the project, the last canoe carved in Musqueam occurred in 1985. 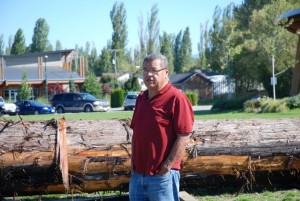 One important group invited to participate in, and witness the Old Woman log move, were the children from the Musqueam daycare. 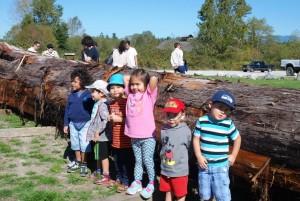 Welcoming the Old Woman log into Musqueam ended with a celebration at the Musqueam Cultural Centre. It was a time to tell stories, visit with one another over tea, coffee and bannock, review plans for the carving shed, and look toward the future. 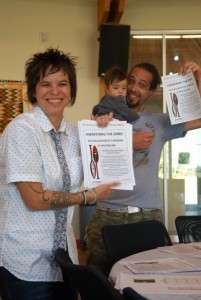 The Old Woman log’s entry into the Musqueam community was not lost on the littlest Musqueam people. On September 12, 2015 three-year old Lennox told his grandparents about witnessing the log move during daycare the previous morning, and shared what he’d learned from the experience. He said, “An old lady log is going to be made into a canoe, and we all need to take care of her”. Then he tried to persuade his grandparents to go visit the Old Woman log with him at 7 A.M.

Something tells us that both Lennox and Ruby will be frequent visitors over the next months while the Old Woman log transforms into a journey canoe, and awakens the spirit of canoeing in their community.